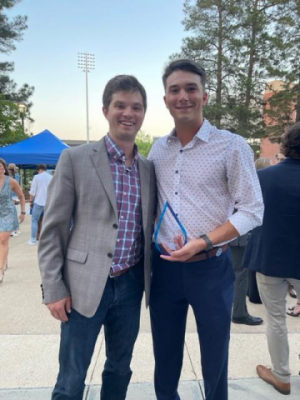 We have a very special guest for all of you Tech fans out there. Kyle Crigger, your closer for the Diamond Dogs, answered a few questions for us after winning the Comeback Player of The Year Award at this year’s Techspy's. Before we get into our Q and A with Kyle, I'd let to tell you a little bit about his story.

Kyle most likely tore his Ulnar Collateral Ligament (UCL), more commonly referred to as the Tommy John ligament, in the Spring Season of 2020. He ended up having a UCL reconstruction in late July of that same year. Typically, after a full reconstruction, it takes 12-15 months for MLB players to return to their prior level of function. To make a long story short, Kyle worked his tail off and finished rehab in just 6 months. He returned to the mound in early April of 2021 and pitched a shutout inning just 9 months after his surgery. He went on to lead the 2021 team in saves and help the Bulldogs win Conference USA, and host a regional.

This year, Kyle leads the team in appearances, has a 10 K/9 stat-line, and 1.43 ERA which is good enough for Top Five in the country! Kyle also plays the game with passion and is an easy guy to root for. Check out what he has to say about his rehab process and pointers he has for other athletes that might be going through a tough rehab themselves.

Tell us a little bit about your injury and what were your initial thoughts when you found out that you tore you UCL?

Kyle Crigger: I believe that I got injured in my first appearance at Louisiana Tech when we were playing against Lafayette. I don't remember a certain pitch when it happened but I do remember it burning pretty bad. When I found out it was torn, I was devastated and worried about my career on the mound. I knew I was going to have to work hard to get back to where I was before the injury.

What parts of the rehabilitation process were easier and/or tougher than you thought?

KC: The rehab was pretty challenging at first with getting my range of motion back. That was one of the most difficult parts of rehab. The training part of rehab was so much easier than I expected. All of the workouts and exercises were challenging but they were perfect for me, as in they were difficult enough but not too hard to where I could injure myself more. The throwing program I was on seemed perfect as well. I didn't experience much arm pain during the throwing program, at times my arm felt weird but it came back naturally after the first couple of weeks.

How do you think you were able to come back so quickly after a devastating injury?

KC: I think I was able to come back faster than most people because of my team's work ethic. I had Myles Fish, one of the best athletic trainers I could ask for, that met me every day of the week to help me get better. Also, having Chase and the people at LOTS there for me at all times helped me more than anything. They would go out of their way to help me, and if I had any issues, they were on top of it in a snap of a finger. I never had to worry about them putting me in danger and they watched my every move during rehab and helped me get to the next step of rehab. Based on how I felt, there were weeks we would get after it pretty hard and weeks where we tried to maintain strength rather than trying to push the limits on getting me back faster. I think this played a huge role in getting back faster than most pitchers.

Finally, are there any tips or advice that you would give to athletes that have had a serious injury or going through a tough rehab?

KC: My tips would be to listen to their body and trust their trainers and physical therapists. You have to listen to your body and communicate with your PT on how you feel because they should know what's best for you. You want to do all you can to get back faster but if you do too much, then it can also take you longer to get back. I put all of my trust in Myles, Chase, and the rest of the LOTS crew and we were all honest with each other and it has changed my career, I believe. If it wasn't for them, I wouldn't be where I am today. So, listen to yourself and put your trust in your rehab team to take care of you. And NEVER give up!

Thank you Kyle! We couldn't think of a better athlete to have as our first official NIL partner. Now go win us a CUSA Championship!